The City that never sleeps

The lights are out and it is dark. The City that never sleeps has turned out the lights. We arrived home to a much different place than what we left a month ago. I started noticing the difference as we neared the Mississippi-Louisiana border. Trees were uprooted and other were snapped in half like toothpicks. We thought it would be a good idea to fill up the gas tank before crossing the swamps. We stopped in Hammond for gas. The gas station was full of cars. Hand written signs on plain white paper said "Out of Gas". We left and hoped our half of tank of gas would be enough until tomorrow. We crossed the Bonny Carre' Spillways and I saw the lights from a refinery. I looked for the city lights of New Orleans. It was dark. We got off at the I-610 spilt and headed down Airline Hwy towards Williams Blvd. Piles of debris lined the side of the road along with refrigerators that had gray duck tape around them locking the smell and mold inside. The smell of things rotting was overwhelming. We continued on knowing our apartment complex would be a mess also. We were prepared. Home was just a few blocks away. We walked into our apartment and it looked just like it did when we left it. No water damage, no mold on the walls and no trees through our walls. We were the lucky ones. Our internet access is sparatic and the cell phones always have a busy signal. I wanted to get a dial up service but Art said "no" just be patient. That just about cuts me off from the rest of the world and my friends. That is the part of all of this I dislike the most. This morning I took a few pictures of the storm damage outside of our apartment. 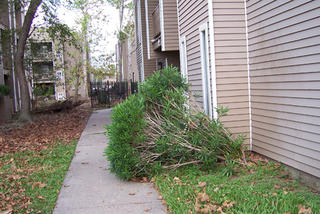 This is the sidewalk that leads to our apartment. 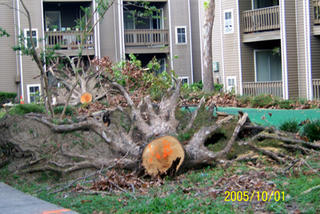 These Cypress trees fell behind the complex next to ours. 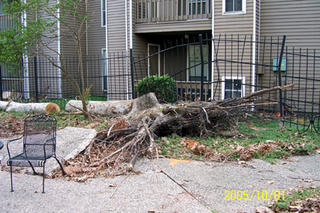 This Cypress tree fell right in front of our patio. We were so lucky it fell along side of the apartment. Otherwise we would not have had much to come home too. It ripped up the cement patio by the pool and crushed the wrought iron fence. I can't imagine the damage we did not see as clean up has been going for a couple of weeks. We took a ride this morning to the post office to see about getting our mail. The lobby was open but the counter was closed. I brought my camera a long to take more pictures. Instead I just looked in awe at the damage in the process of being cleaned up. Trees on roofs and laying in yards. Not just trees but very large trees. Fences were down everywhere. Like someone had come along and stepped on them here and there. I saw a tent city set up by the national guard and a church parking lot with a sign giving out food and water. There is only one Wal-Mart opened and that is in Kenner. You have to stand in line with a number and wait your turn to go in and shop. The Super Wal-Mart on Jefferson Hwy by my house is closed. Small signs line the side of the road with stores that are open and others saying help wanted. Big pieces of plywood spray painted saying "Open for Business" in other places. You see the path the hurricane took as she passed by. The telephone poles are bent and the street signs are pointing in the wrong direction. Everything looks like it has been tilted in the wrong direction. A trip the grocery store to replace food in the house meant long lines. Not everything was in stock. We learned quickly that you get your errands done before dark. We came home to quite a few U-hauls in the parking lot with people packing up and leaving for good. I wish we were back in Michigan.
Posted by Beverly Herman

Thank goodness that your apartment was intact! Hope that you can pack up and leave for good sometime soon. What an eerie place NO must be now!

Beverly - You, your husband and neighbors are in our thoughts and prayers...

So glad your home is okay. Seeing the city in such disarray must be heart breaking. You and your family are in my prayers. Hang in there!