One German and one Japanese crochet hook, both were put to the test this week on my bead table. I've been crocheting with the German crochet hook for years. One day it just disappeared. My magic crochet was missing. Would the new Tulip Crochet hook from Japan be able to compete with it's German counterpart? Would the hook slide from loop to loop like the blades of skates on ice? 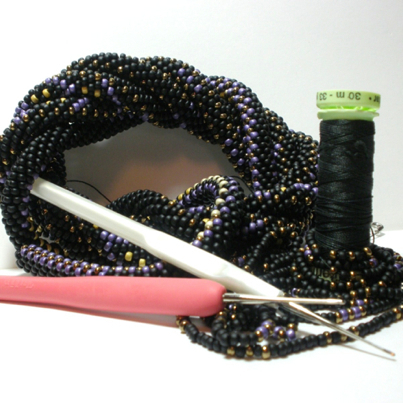 There were no nashing of hooks. Although they felt different in my hand. Both hooks were able to keep up with the rhythm of slipping a bead and passing through the hook. I have finished 60 inches of my third Urban Stripes rope. Tonight I will join it together. 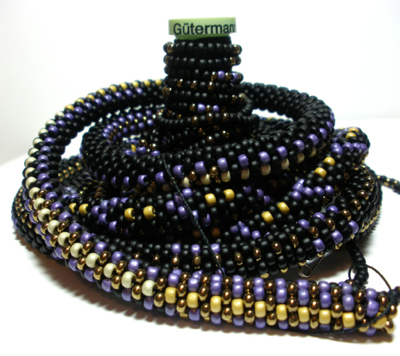 Who won, The German hook or the Japanese hook? They both did, but the German hook will always be my favorite. It's just holds the magic.

Visit BTW and see who has what on their bead table.

That beaded rope is a stunner. Funny how we get attached to a particular tool. I know I have my favourites and nothing else will ever come close.

Isn't it amazing how it throws us out of rhythm to misplace a certain tool? The crochet hooks I use for bead crochet are really old ones my grandmother had - not the nice comfortable ones with the larger handles, but those old ones that are really skinny. I just can't seem to crochet "right" with anything else. :-)

I also use the skinny steel hooks, not that has helped much in my quest to do a slip stitch rope. What's the name of the German hook & is it available.

LeAnn, Thanks for stopping by and the kind words on the rope. Your right about our favorite tools. When one is missing nothing else will come close.

MaryLou I have a some very old crochet hooks that were passed down. My hands need that handle on the hook. Thanks for stopping by!

Hi Marilyn, The German crochet hooks were a gift. I heard they weren't making them anymore. The Tulip crochet hook (size 8) is a good alternatiive.
Purple, black and gold it is. I was exposed to too much football this season!! Thanks for stopping by.