Apartment Dwelling Is Not For Sissy

The maintenance crew was on the spot ready to renovate the apartment above us. He don's a respirator. What is the respirator for? 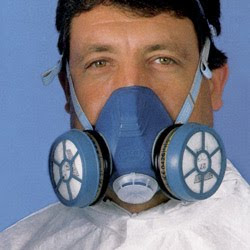 I thought they were resurfacing the counter tops. I tried to ignore the fumes. Friday and Saturday came and went. It was 90 degrees and the air was thick and heavy with humidity. The fumes settled over us. Monday I went to the front office and asked them please to ventilate the upstairs apartment. We were coughing and Cricket was wheezing. My asthma kicked in. I had a rescue inhaler. Tuesday morning I woke up and couldn't get any air in my lungs. I jumped in the shower hoping the hot steam would help me breath. I got dressed and drove to the clinic. I knew I was in trouble. My head was pounding and I was gasping for air. I blew zero in the meter that checked my airflow. My blood oxygen levels were down to 83%. Two breathing treatments and a steroid shot later I blew 200 on the meter and my oxygen levels were back up to 95%.
I reported the incident to the front office. They offered to put me in a courtesy apartment and told me to turn in a copy of medical bills. 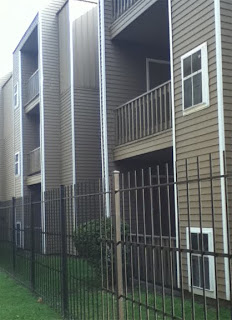 Around Two: The second coat. It wasn't the counter tops they were resurfacing. They were resurfacing the patio floor directly over the room I spend the most time in. The beadroom. Sally was visiting when they started the second coat. She heard my lungs shut close and rushed me out of the house as the heavy fumes filled the air. Thank goodness for my friend. She took very good care of me.

This afternoon I turned in my bills and was told they probably would not be paying them since the chemical was applied outside. Aren't they lucky I had an extra money this week to pay those medical bills. I think they are wrong and should be responsible. Any time someone has to wear a respirator in an area to work the people exposed to those same chemicals should be protected. We won't talk about the 50mgs of steroids a day which makes me crazy. I told my husband to put on your amour. He might need it to survive me for the next few days on steroids.
Apartment dwelling is not for Sissie!
Posted by Beverly Herman

How absolutely horrible for you! You should have legal recourse to get your medical bills paid, especially if they did not inform you prior to the work and didn't relocate you for the duration. It shouldn't matter that it was outside if it was work on the building that you reside in. The strategy that often works is to give them a request for reimbursement in writing stating the reasons they're responsible and then just verbally let them know that if you don't receive a response you'll pass it along to an "attorney friend"!

I hope they do the right thing and pay those bills for you-it obviously won't make your health any better but at least you won't have the double whammy of also having to pay the bills! Good luck :)

It just makes me nuts, the way that toxic crap is put out there for us all to breathe, eat, and touch, with little or no care on the part of the people responsible.

From kiln fumes to road tar to paint work, it's just all wrong.

If this happens again, simply insist that they move you. Don't leave their office until they help you. That way hopefully there won't be medical bills. Hope you are going to be OK.

So sorry to hear of your troubles. I would definitely follow up on Mellisa's suggestion - you shouldn't have to foot the bills for this.
It is a disgrace that these companies have so little regard for the health of people.

Kate I thought about you as I wrote this post. All the warnings and advice you wrote about toxic fumes.

Kate-Mellisa-Renate
Thanks for stopping by.